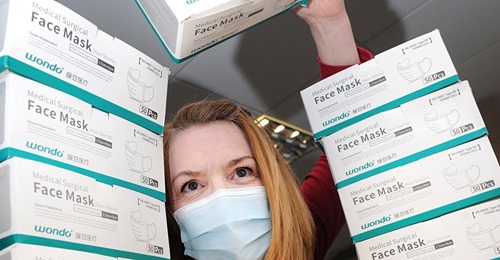 Three charities – two from Eastbourne – that have worked tirelessly for their East Sussex communities have been honoured with The Queen’s Award for Voluntary Service, the highest award a voluntary group can receive in the UK.

Lewes-based Sussex Pathways along with Eastbourne’s Wayfinder Woman and Medi-Tech, stand proud this week as part of an elite group of 241 charities from across the UK and the Channel Islands to receive the much-acclaimed royal accolade.

The voluntary service award aims to recognise outstanding work by volunteer groups to benefit their local communities and was created in 2002 to celebrate The Queen’s Golden Jubilee. It is recognised nationwide as the charity world’s ultimate honour.

The three East Sussex successes this week have brought enormous pride to the county’s wide and diverse voluntary sector.

Lord Lieutenant of East Sussex, Sir Peter Field, said: “I’m absolutely delighted that the work of these three groups has been recognised in this way. During our assessment visits, our panel were incredibly impressed by their commitment to their varying causes.

“Each had also adapted so valiantly to continue to operate and support some of those most at need during the awful pandemic through which we have lived. They all did such incredible work and East Sussex salutes them.

“They have set a high standard for others to follow but we know we will see more excellent groups stepping up and being nominated for the award in the future.”

Award winner Sussex Pathways has worked for more than 12 years with the victims as well as the perpetrators of crime, helping to heal the harm and pain caused alongside resettling offenders into the community. Its team of more than 30 volunteers begins work with inmates inside Lewes and other prisons and extends beyond meeting them at the prison gate to helping them find accommodation, support, jobs – and a new purpose.

Fellow award winner Wayfinder Woman has equally achieved some remarkable successes in its relatively short life through its ambition of helping marginalised women to “stand tall and shine brightly”. The group’s aim has

been to further the cause of women and young girls in nurturing their social inclusion, raising aspirations, relieving financial hardship, instilling confidence and giving them “the tools to transform theirs and their families’ lives.”

Medi-Tech, the third of the East Sussex trio, is an entirely volunteer-led charity reaching out both locally and to people across the world with cutting-edge medical technology. From its Eastbourne base in the past four years alone, Medi-Tech has supplied some £1.5 million of equipment to local hospitals and related medical services.

Overseas, too, it has made a huge impact in helping to teach new skills to surgeons in African and other nations – globally benefitting some 500 doctors.

Award recipients are announced each year on June 2, the anniversary of The Queen’s Coronation. Representatives of Sussex Pathways, Wayfinder Woman and Meditech will receive their award crystal and certificate from Lord-Lieutenant Sir Peter Field later this summer. Two chosen volunteers from each of the three groups will also get to attend a garden party at Buckingham Palace in May of next year, Covid restrictions allowing.

Lord-Lieutenants represent the monarch in each of the UK’s ceremonial counties.

This year there were 241 recipients of The Queen’s Award Voluntary Service from across the UK and Channel Islands.

More information on the recipients and the Award can be found at https://www.gov.uk/queens-award-for-voluntary-service

Full details on how to nominate are available at https://qavs.culture.gov.uk/.