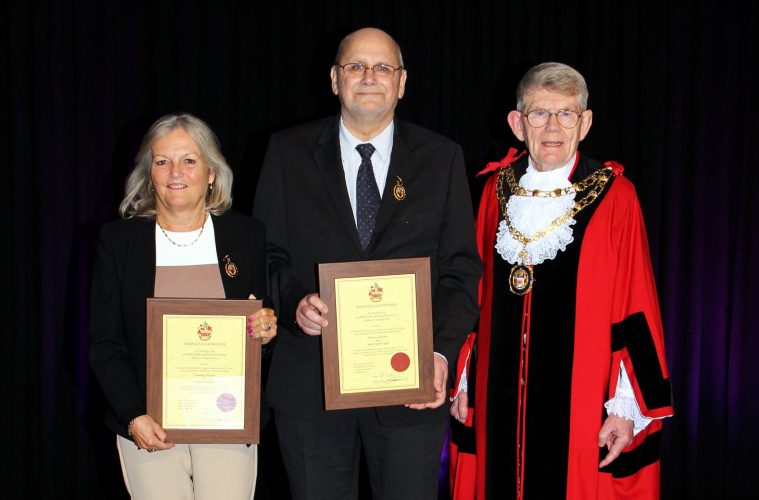 Two retired councillors have been made Honorary Aldermen in recognition of their ‘eminent service’ to Eastbourne.

John was a borough councillor from 1991 to 1998 – during which time he served in various roles including Leader of the Council – and from 2011 to his retirement in 2019.

Proposing the motion to honour him, Councillor Alan Shuttleworth said: “During his service as an Eastbourne borough councillor, John gave many years of dedicated service both as a strategic leader fighting for improvements for the whole town as well as helping many hundreds of people of all ages as part of his work as a local councillor. He pressed for improvements in the Old Town area, which I know he is extremely passionate about.”

Councillor Shuttleworth praised his ‘enormous energy, enthusiasm and drive, as well as great organisational skills’ and added: “The dedication and single-mindedness of purpose he brings to helping people and achieving for his community remains an inspiration for all of us.”

The motion was seconded by Councillor Colin Belsey.

Councillor Belsey proposed the motion to honour Sandie, saying: “It will be delightful to see her made an Honorary Alderman this evening.”

He described her as ‘a grafting councillor’ for Ratton ward, who ‘got the job done quietly and efficiently’.

“She was very good on the doorsteps with people, she was very much a people person,” added Councillor Belsey.
This September Sandie will complete 30 years as a governor at Motcombe School.
“This is amazing and shows Sandie’s dedication which she had as a councillor and this continues in her retirement from the council,” commented Councillor Belsey.

Councillor David Tutt, who seconded the motion, said Sandie ‘served with distinction’ and was ‘a very diligent councillor’.

Both motions were unanimously approved.

With photo (r to l) of Honorary Aldermen Sandie Howlett and John Ungar with the Mayor of Eastbourne, Councillor Pat Rodohan.