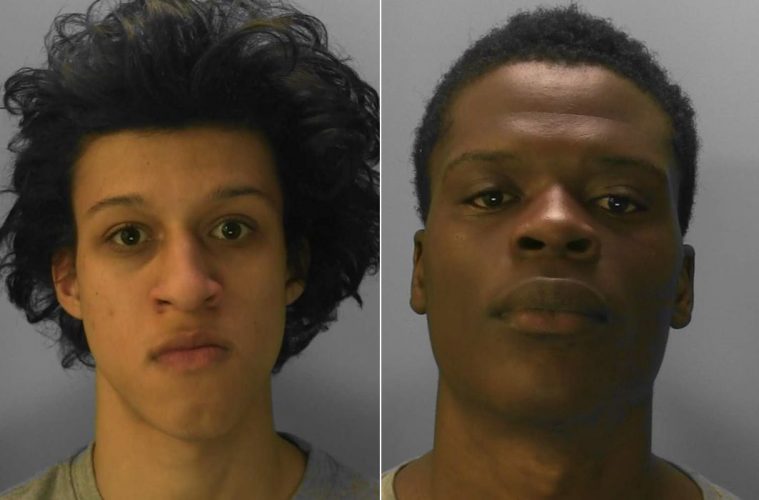 Two men have been jailed for an attack which left a teenager with life-changing injuries in Eastbourne.

Ashley Roberts-Araujo,19, and Inno Makolo, 21, (left and right in main picture) both admitted wounding with intent and possession of an offensive weapon in a public place when they appeared in court on May 21.

The charges related to an assault in Terminus Road on Saturday 10 April in which a 17-year-old boy suffered a significant stab wound to the stomach.

The victim had been with friends in the town centre earlier in the day when they were involved in a verbal altercation with two men.

Both parties dispersed, but the victim encountered the two men again later that evening while in Terminus Road by the entrance to The Beacon shopping centre.

As he was running from them, he tripped on a kerb and fell. It was while lying on the ground that he was stabbed once to the stomach.

The victim was flown by air ambulance to the Royal Sussex County Hospital in Brighton where he underwent emergency surgery. He has been left with life-changing injuries as a result of the attack.

The suspects were seen to run from the scene in the direction of Hyde Gardens, disposing of an item in a bush as they did so. Police later found this to be a bloodied knife, which tests found had the suspects’ DNA on.

Officers investigating the assault carried out a number of fast-time enquiries, including extensive CCTV trawls. They identified footage showing the suspects buying a knife in The Beacon shopping centre, and in Terminus Road around the time of the assault.

Makolo and Roberts-Araujo were both arrested, charged and later pleaded guilty at court.

Both were also given sentences of six months, to run concurrently with the six year sentences, for possession of offensive weapons.

Investigating officer, Detective Constable Jo Lane, said: “This was a vicious attack that has left a teenager traumatised and with life-changing injuries.

“I’d like to thank everyone who supported our investigation, and the members of the public who administered vital first aid to the victim at the scene.

“Thanks to a swift response by officers and detailed witness testimonials, we were able to gather strong evidence which led to guilty pleas in court.

“Makolo and Roberts-Araujo were only visiting Eastbourne for a short period of time, yet chose to engage in serious violence while they were here. This will not be tolerated in our community and I’m pleased to see these two dangerous offenders sentenced for their actions.”