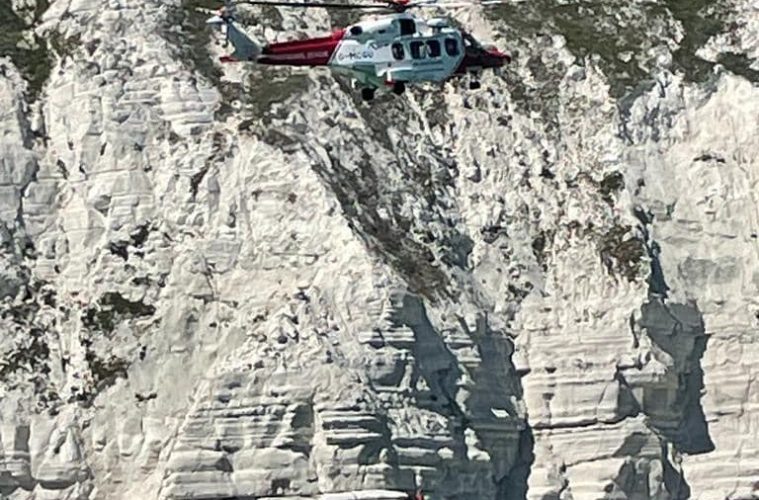 Two women rescued from the base of cliffs at Beachy Head

Two women rescued from the base of cliffs at Beachy Head

Coastguards are reminding people to check tide times before they set out on cliff or coastal walks after two women were rescued from the base of cliffs at Beachy Head on Thursday.

The Coastguard received a 999 call from a kayaker who had spotted the two women, one of whom had climbed up the cliff to escape from the rising tide, just east of Beachy Head Lighthouse. Newhaven, Eastbourne and Birling Gap Coastguard Rescue Teams were called, along with the Coastguard helicopter and Eastbourne RNLI Inshore Lifeboat. The two women were about 50 metres apart and one of them had climbed some way up the cliff to stay out of the water.

One of the women was rescued by the lifeboat and temporarily transferred to a local fishing boat and the other was winched to safety by the helicopter. The helicopter then collected the first casualty from the fishing boat and delivered her to dry land. The coastguard rescue teams helped to co-ordinate the rescue and received both casualties at Cow Gap. They were also prepared to deploy their rope rescue equipment, should the helicopter have been unable to safely winch the second casualty from the cliff face.

Julia Fuller, senior coastal operations officer for HM Coastguard says:
“We are very relieved that the two women were rescued safely and, although a little shaken by the experience, none the worse for their ordeal. They were very fortunate that the kayaker happened to see them and called 999.

If you’re going for a coastal walk this weekend go exploring as the tide is going out, make sure you have time to get back and know when the tide is going to be coming in. If you get caught out by a rising tide, find a safe location, call 999 and ask for the Coastguard.”