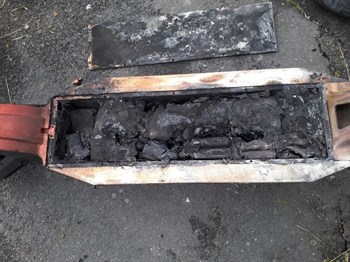 We want to encourage people who use these products to be aware of the risks and highlight the dangers of storing them in escape routes in the home or in communal areas such as hallways in blocks of flats.

On 3rd July, we were called to attend a fire at a residential property in Eastbourne.  Crews from Eastbourne and Hailsham attended.  Upon arrival, crews used Breathing Apparatus to enter the building and one Hose Reel Jet was used to extinguish the fire which had started in the kitchen area of the property.  Once the fire was extinguished, a Fire Investigation took place.  The fire was deemed to have been caused by an e-bike battery that had ‘exploded’ whilst charging in the kitchen area.  The fire caused considerable damage to the kitchen.

London Fire Brigade has also issued an urgent warning regarding e-bike batteries.  One incident involved a fire caused by an e-bike battery that was being stored in a communal hallway, therein blocking the residents’ means of escape.  Luckily, the occupants of the flat were able to escape by climbing out of the window.  We have published the full story on our Heads Up website.

Station Officer Matt Cullen, (Fire Investigation Officer) with London Fire Brigade said: “We have seen that when these batteries and chargers fail, they do so with ferocity which can leave residents with few safe options for escape.

These bikes and scooters are often stored and charged in escape routes in homes or communal areas so when a fire does occur, escape routes are blocked which immediately makes an already serious situation much more frightening for those involved.

We have seen people forced into jumping from windows as they can’t get out of their front doors as the bike or scooter which has caught fire is in front of it.

Even when the bikes or scooters aren’t in escape routes or communal areas, the fires are fierce enough that they pose an immediate danger to all occupants and we are seeing an increase in these types of fires.”