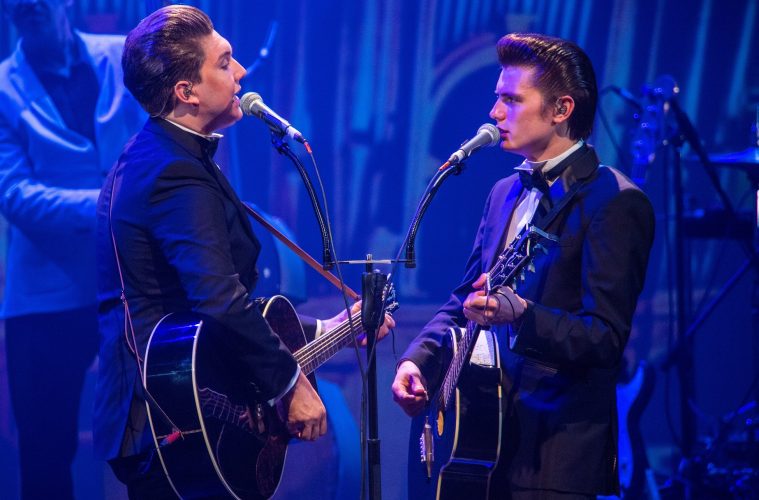 Walk Right Back, 5 May, at The Congress

Walk Right Back, 5 May, at The Congress

PHENOMENAL STORY OF TWO BROTHERS AND THEIR UNFORGETTABLE MUSIC

Walk Right Back the story of The Everly Brothers comes to Eastbourne’s Congress Theatre, Thursday 5 May, 7.30pm.

From the producers of smash hit show That’ll Be The Day,this critically acclaimed production tells the story of the pioneers of country rock, The Everly Brothers.

Featuring hits including Bye Bye Love, All I Have to do is Dream, Wake Up Little Susie and Cathy’s Clown, this concert-based musical entwines the story of the Brothers, their rise to world-wide fame, the pressures that bought with it, their furious and public separation and ultimately their glorious reunion.

With “harmonies from heaven” that influenced The Beatles, The Beach Boys, and Simon and Garfunkel, The Everly Brothers were unmatched in their talent. This production will also feature songs from some of the Everly Brothers’ good friends, Buddy Holly and Roy Orbison.

Producer Trevor Payne (creator of That’ll Be The Day) says: “The Everly Brothers were an original and unique act that had a sound like nothing else. Their harmonies were so tight that every group wanted to emulate them. Before that there was a singer, a band and backing vocals, The Everly’s entwined all of them and created “the harmony group.”

Walk Right Back is the first concert-show to tell this phenomenal story of two brothers and their unforgettable music. Their rise to fame as humble country singers on local radio to international superstardom, influencing the course of modern music. Their singing partnership ended with a very public spat at a concert which led to a decade-long feud but led to a reunion which united their voices once again, bringing them back to each other, and back to the world.

Featuring live music and brilliantly matched vocals from a talented cast this celebration of music is an absolute must!