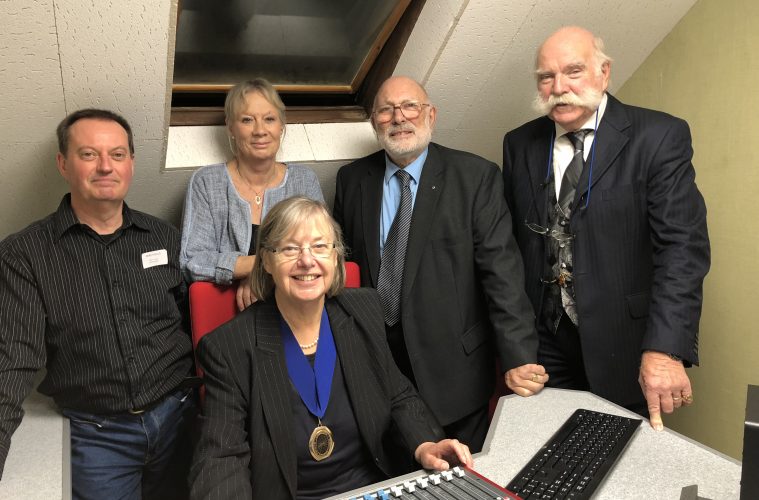 The Trustees of the Wealden Talking News Charity are honoured and delighted to report the award of the Queen’s Award for Voluntary Services (QAVS) in this Her Majesty’s Platinum Jubilee Year.

The award gives recognition not only to the present approximately 70 Volunteers who give of their time freely to produce a weekly recorded newspaper and Sussex-wide magazine service for the blind but also to all those living and deceased who have given similarly freely of their time in the past.

The idea of providing a recorded newspaper was conceived in1975 and was named the Heathfield & District Talking Newspaper Association (HTNA). Funding for recording equipment was provided by the Heathfield Lions Club and the HQ was soon shifted to the home of chairman, Ted Davies where the admin and copying took place in a caravan in his garden. Ted Davies later went on to form The National Talking Newspaper UK which was taken over by the RNIB in 2013 and sadly moved away from Heathfield in 2016. WTN was lucky enough to inherit several semi-professional readers however, strengthening its volunteer base and resulting in the setting up if its hugely successful Sussex-wide magazine service.

The Wealden Talking News Charity operates from an attic office in Heathfield High Street, where volunteers have built a sophisticated recording studio. Production was maintained throughout the pandemic not missing one edition. The Charity relies on individual donations, street collections, bequests, grants from civic authorities, local round table and Rotary together with bonfire and carnival associations in Heathfield and Uckfield. There is no charge to the visually impaired listeners, there are no paid staﬀ and no expenses are paid to the volunteers.

The local support that the Charity receives, in both donations and volunteers, is a great tribute to the strength of the community spirit here in East Sussex and this award serves also as a recognition of that long standing attribute.