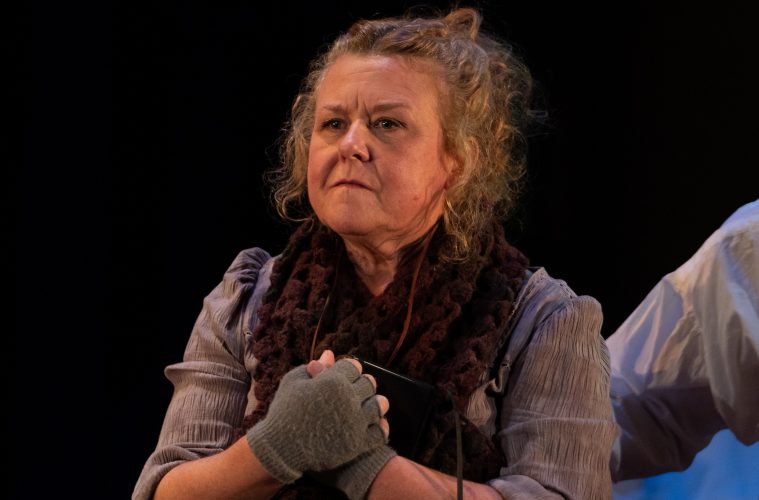 The American Gothic classic, Washington Irving’s The Legend of Sleepy Hollow has been transformed to the stage with this new production; and it’s found the perfect setting in the glorious surroundings of Eastbourne’s Victorian Playhouse the Devonshire Park Theatre this autumn from 23 – 27 November.

Coronation Street legends Wendi Peters (Big! The Musical) and Bill Ward (Everybody’s Talking About Jamie, Emmerdale) lead the cast in this thrilling new adaptation. Transforming the American Dream into the American nightmare, The Legend of Sleepy Hollow unleashes one of the most terrifying monsters from the horror canon – the Headless Horseman.

We’ve been speaking to Wendi:

How would you describe the show and your character to someone who hasn’t seen the production?

It’s a folk horror – intriguing, scary, clever, witty with spectacular illusions. You’ll be on the edge of your seat! My main character, Mariette, is the strange widow of Sleepy Hollow. She lives on the outskirts of the village, alone, and has a few secrets that are revealed throughout the play. She takes Ichabod under her wing when he arrives and insists that he stay with her.

What was it that initially drew you to the play?

I loved the script, it’s very clever, with multi role playing which is always great fun. I couldn’t put it down. I’d never seen the film but knew of the story. This is a completely new, and wonderful, adaption by Philip Meeks. I’ve also never appeared in a horror piece, so was intrigued by that… it’s really exciting!

Were you familiar with the original Washington Irving text, or had you seen other adaptations of the tale prior to taking on this role? Will you be drawing inspiration from them?

I wasn’t familiar with the text, and I’d never seen the film. I knew the story, and started watching the film, but 20 minutes in I stopped it. It’s so very different from our adaptation, and, if I’m honest, I wasn’t really enjoying it. Our production is so much more exciting and moves at such a fast pace. I’m seeing this as a whole new piece of writing and story, and I love the idea of creating something from scratch.

Have you worked with any of the cast/ creative team previously?

Most of the cast are a lot younger than me, so our paths haven’t crossed. It feels strange to now be the mother, sometimes grandmother, of the cast. I guess I’m getting old.

However, Bill and I worked together at Corrie. We were there over the same 4 year period but our characters were rarely in the same storyline. It’s going to be great to catch-up again after 14 years!

The Legend of Sleepy Hollow promises to shock and scare audiences. What scares you the most?

I’d say, on the whole, I’m quite a brave person although I don’t like, or watch, many horror films. I don’t really believe in the paranormal. I once did a ghost hunting programme, and found it quite funny. Having said that, I don’t like the dark much, especially in the situations I’m unsure of.

The Headless Horseman is a legendary figure in the horror genre. Why do you think this character has stood the test of time?

I think it was one of the 1st horror stories written, and creates such a vivid image in people’s heads… hopefully, when people see our production, they’ll take away more than just an image in their heads.

What do you want audiences to take away from the production?

It’s been such a terrible 18 months for theatre, both actor and audience wise, that I think everyone will be thrilled to be there and just be entertained. As a piece, I’d like them to come away having been scared and on the edge of their seats, but also having relaxed and laughed. They will go away with a few questions too, hopefully.

You’ve had quite an eclectic career, both on stage and TV! What is the biggest difference between performing on stage and screen?

I’ve been so lucky, having worked in all aspects of theatre, tv and radio. I love that it never seems monotonous or boring, and enjoy learning new things too.

The main difference is the level of playing. On stage you are performing to hundreds and have to make sure the back row is included. I love touring because you are in a new space each week to explore your performance. TV is much more intimate and held back. I love doing both, but if I had to choose one for the rest of my career, it would definitely be theatre.

What are you most looking forward to while on tour?

Seeing a couple of theatres that I haven’t worked at before, but mainly just being back on stage, entertaining audiences, and doing the job I love!