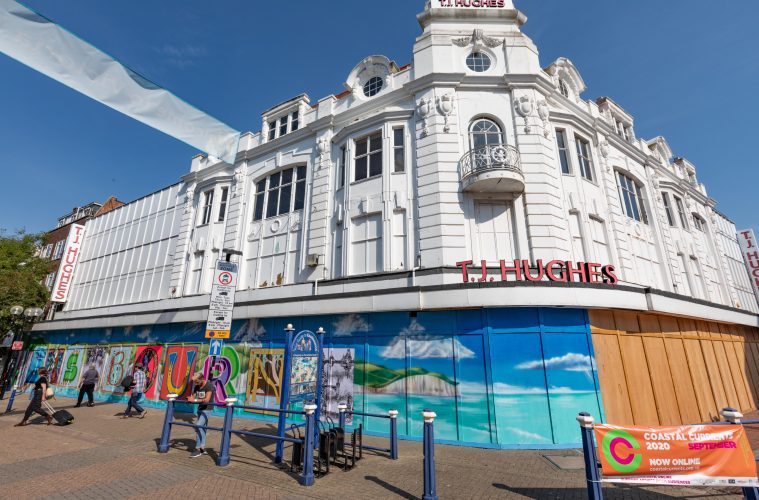 What do you think of the plans for the TJ Hughes site in Eastbourne Town Centre?

What do you think of the plans for the TJ Hughes site in Eastbourne Town Centre?

The plan is to demolish the former TJ Hughes building in Terminus Road and replace it with a six-storey mixed-use building, to be known as Burlington Corner.

The new building would have 700sqm of commercial space on its ground floor and 48 apartments on the floors above. It would also have a large residents’ garden on its first floor.

In a planning statement submitted as part of the application, a spokesman for the developer said: “The proposed mixed-use scheme would transform the site and optimise the use of previously developed land at a highly sustainable location.

“It would retain commercial uses and introduce much-needed housing, including affordable housing. The comprehensive regeneration of the site would help ensure that the vitality and viability of the town centre is maintained and enhanced.”

An Eastbourne Society spokesperson said, “We are appalled by the proposals for the demolition and replacement of the former TJ Hughes building.

“To tear down the original 1925 building and replace it with a brutalist block is nothing short of vandalism.

“Designed by P D Stonham – one of the leading architects of the day who ran his business in Eastbourne – this building is a landmark in the Seafront Conservation Area (which was deliberately extended around this building to give it extra protection) and contributes hugely to our town centre’s identity.

“Comments received during the ‘extensive pre-application consultation’, appear to have been ignored as the plan being put forward remains virtually unchanged.

“To bulldoze our heritage and then suggest renaming it ‘Burlington Corner’ is at best insensitive and at worst utterly disrespectful.

“This plan, if accepted, will go a long way towards destroying the unique character of our town centre.

“We refuse this ugliness. Beautiful Eastbourne demands better. These plans must be stopped.”