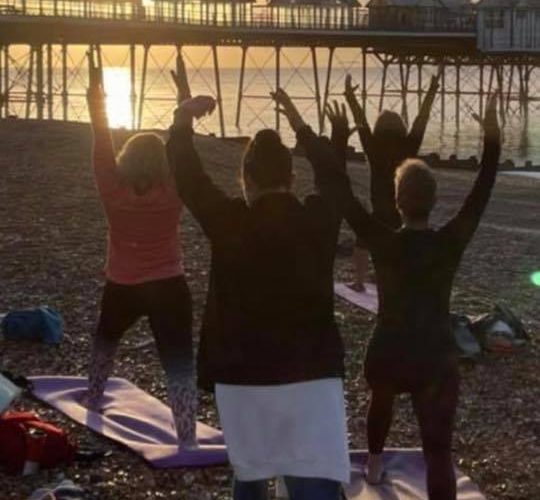 WHO is this woman in the black top/blue jeans with the white cardigan/jumper around her waist?

She gate crashed an early morning sunrise yoga session on Eastbourne beach on Saturday between 5am and 6.30am.

Here is Leigh Edwards: “She stank of alcohol (possibly a rough sleeper/homeless person) and decided to stand extremely close to my wife (on the right) and then proceeded to steal her phone, (iPhone 8 plus) in a pink wallet type case, driving licence, Tesco credit card and Halifax debit card.

“All have been cancelled and the phone blocked. Fortunately she didn’t get a chance to use the cards anywhere, presumably as it was early and nowhere was open.

“She also switched the phone off so we couldn’t locate it. She had a male accomplice lurking who she was seen talking to immediately before the incident.”

Update:It would seem that this person is well known to the Police. Two separate people have given Leigh the same name.