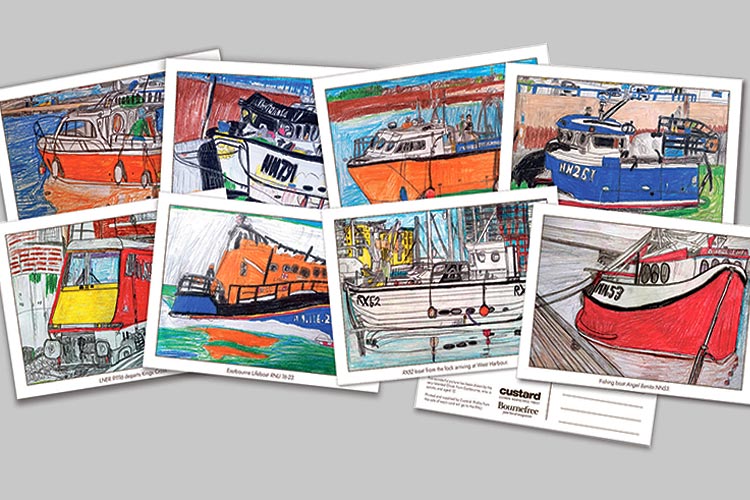 Your chance to buy Oliver’s amazing drawings - with every penny going to Eastbourne RNLI.

LAST month we told you the amazing story of Oliver, the 12-year-old autistic boy from Eastbourne.

Now, thanks to Custard Design who produce Bournefree, eight of his creations have been turned into postcards.

There are 100 sets of eight postards for sale at £10 per set (includes postage) with every penny going to the Eastbourne RNLI. (Or £1 each).

Mum Anna said: “We are so thrilled that Custard has agreed to print the cards free of charge.

“We are all very proud of what Oliver can do. It was always our dream to have the drawings turned into cards.”

Andy Thomas, owner of Custard, said: “It is an absolute privilege. Oliver is an amazing young person.”

And look at what he can do!

These amazing drawings are just a very small part of the boy’s talents.

Mum Anna said: “I am so very, very proud of Oliver. What he achieves is so, so special and he just gets better all the time.

“Oliver has a photographic memory and he can remember what happened on certain dates from years ago. He also appears to have super sensory skills too.

“He started drawing when he was aged seven. He would take 2,000 photos of a film and then draw pictures from the photos.

“Cars and Mr Men characters appeared to be his first favourites and then when we moved to Sovereign Harbour, he developed a fascination for boats. He goes down to the lock every day.”

He has become something of a local celebrity down the Harbour. His pictures are regularly featured on social media groups and some of the fishermen have got to know him and invited him on to their boats.

Mum Anna said: “It doesn’t take Oliver long to produce a drawing, sometimes as quick as 20 minutes. I have noticed in the last year that he has started to include more detail, including shadows and 3D.”

The link to his gallery is: www.shra.co.uk/oliversgallery/