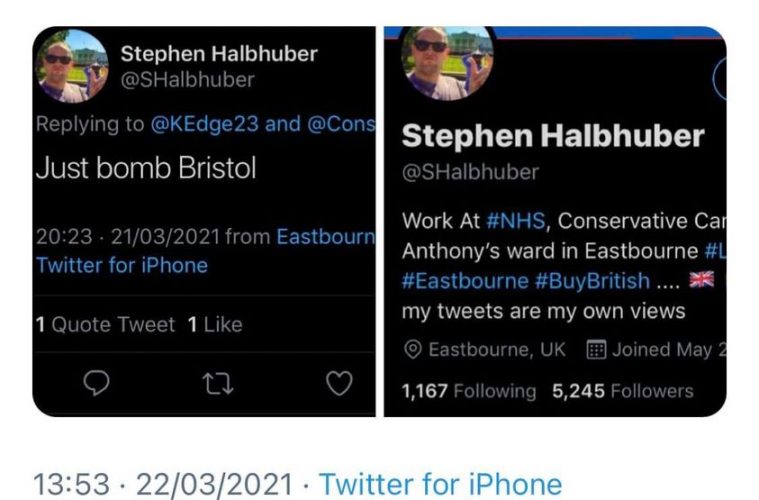 A TORY candidate for Eastbourne has sparked uproar with a tweet saying: “Just Bomb Bristol.”

It follows the horrific scenes on Sunday in Bristol where protestors ran riot.

Some 21 officers were injured when individuals hijacked a peaceful protest and brought anarchy to Bristol streets on Sunday night.

Council candidate Stephen Halbhuber tweeted “Just bomb Bristol” in reply to a video showing a protest in the city.

Mr Halbhuber is the Conservative Party candidate for the St Anthony’s Ward in Eastbourne, with local elections on the town due to take place on May 6.

LibDem councillor Helen Burton said: “If you wonder why I fight so hard for the Lib Dems in Eastbourne it’s because these are the values we are up against!.

“I’m beyond disgusted by this Tweet from the Conservative East Sussex County Council candidate for St Anthony’s. We do not need people who think this is acceptable representing us on ANY council.”

It is understood that the tweet has been removed.

We have asked Eastbourne Conservatives and Mr Halbhuber for a comment.